Three Jobs and a whole lot of writing!

Well it's been a while since I last posted... so I'm back with some things to say.

While I had finished my job in Korea and then traveled around Asia and loved every moment of it, I was frightened to return home... why? Well because of the job situation. There are hardly any jobs, so it scared me that I'd be jobless and I am NOT one for staying jobless. I hate the concept. So, within the first 4 days of getting back into the country, my job at the National Trust, though shorter hours, was there still. So I applied and I got the job. Then I find out 3 weeks later that my old job at Kents Cavern was up. I applied, auditioned and got the job. And THEN I saw a job for a Carer in my local town of Torquay and applied and  I got the job. So, I'm a happy bunny. But not only that, the Kingdom of Fantasy Magazine is up and running on Apple now, so my helpful girls Christina and Anna are taking on and rating submissions for me while I try and sort out a sci-fi competition that is running alongside Wattpad... Oh I forgot to mention, I am not back on Wattpad. I couldn't resist, clearly.

So, now that I am back on Wattpad I have been writing like a maniac... However not so much as I have been in the past, I hardly wrote while I was in Korea and when I did it was mostly editing. So it'll take a while to get back into the swing of things, but I don't mind the long haul. I have other things to do now also.

Sad news though for me only a week ago that my Grandma passed away. She was 97 which was a damn good age for her. So there is a long week where I am not doing anything, so I'm just going to tend to the family and read. Not up for writing, not this week. I'll miss her very much though, I just wish that there were more people who would miss her as much as I will.

But on a happier note, my awesome Little Canadian friend, who will soon become a Doctor of English and I am SO proud of her, has kindly offered to edit Loving In Time, as such, it'll be a bit more of a delay, but I'd rather wait this long for it to be perfect, then to hand in sloppy work. I owe her a present when she's finished.

I'm going to reveal the book cover on here and see how many people read this haha. There will be tweaks, but I liked this from the very start and I feel it will suit the actual story and not what people may think it could be. < If that makes sense? O_0

Anyway, here is the cover- surprised? 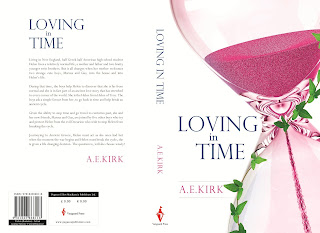 Below are a few deals from Amazon!