Good morning, afternoon or evening.
So I have now left Korea and I am deeply upset about it. I loved my students to bits and it was so sad when they shouted out, "We love you" as I was on stage bowing to everyone as the vice-principal explained that I was leaving. I said a little piece about missing them, loving Korea and telling them to be good for their next teacher. But as I got onto the plane to leave South Korea, I broke down crying.
As lame as it may seem, one cannot truly understand the love and respect I had for my students and the respect that they gave me. I shall miss them so much and, sounding big headed, I know they'll miss me. They won't ever find a crazy a teacher as me and I'm proud and happy I was apart of their lives for such a short time.

However, before I left my secondary home, I went up to the DMZ  (De-Militarized Zone) and found myself depressed. I cannot explain the feeling you feel when you go there. It's mind blowing to see how coveted and strange they are towards the outside world. for example, there is a fake village that one can see from the Southern side. I say fake as the houses are empty. No one lives in the 20+ houses. There's just painted on windows and chimney's with no smoke during the winter. The North Koreans just have it there to show the world that they all live in hoses like these and that everyone is happy... Seriously warped mind.

Of course over the past couple of months we've seen and heard a lot about North Korea. And I will say... who are people kidding when you see North Koreans happy and content? You can't, you don't know. I am betting that there are some out there who love North Korea but in truth, they have been brain washed and I feel so sorry for South Korea who, are still at war with them, and yet yearn to be back together with them, to be unified. There is a train station that cannot go further as it's the end of the line and the northern most part of South Korea at the DMZ. The North Koreans have yet to finish the railway and while I am being optimistic and saying that I hope this will happen... I have to be pessimistic and say that it'll be a VERY long time when this occurs.

So now after the DMZ we went out in Insadong for a last Korean meal. I had Kimchi broth, (which I adore) and ribs that we BBQ'd. Very nice :) And I shared the meal with my boyfriend and three friends. But the weird thing was... that just as we were about to eat a fire broke out in a dis-used building right opposite the restaurant! Before we walked into the restaurant I had smelt something funny but didn't realise it was a fire. The next thing I know there's grey smoke billowing everywhere, a fire engine and about 6-7 fire fighters tackling an electrical blaze. Damn! Sparks went flying and my friend told me and my boyfriend to pose in front of the fire! Damn we've been Koreanised! >< Any-who, after that we had the meal, the fire was put out and we headed off for some drinks then parted ways the following day.

I am now in Cambodia! Siem Reap! First flight was from Incheon to Guangzhou airport where we stayed for about 4 hours and the second flight was from China to Siem Reap. We have 5 more flights to go, which I'll explain in another blog.

So, we arrived in Cambodia on Sunday. Today we went around a lot of temples, even the Ta Phrom temple, aka the Tomb Raider Temple where Angelina Jolie filmed. It was awesome and the other temples were fantastic. Took so many photo's that I used both of my batteries! So now they have been updated and there's just the matter of taking my pictures out of my camera and putting them on facebook! 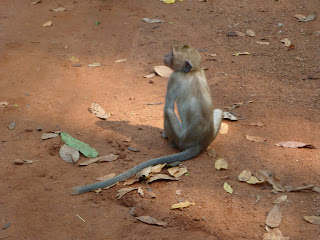 Tomorrow we are going to go to the Angkor Wat temple. I couldn't do it today because my shorts didn't go past my knees. So I need to wear something longer to cover my knees for tomorrow, we also get to see the sunset at Angkor Wat, so that, I think, will be fascinating.

In truth I am liking Cambodia better than Vietnam. I was told today that Vietnam is richer than Cambodia, well maybe so, but Cambodian people seem to be cleaner in a way and they are looking after their heritage alongside 5-6 other countries like India, Japan, China and Czech Republic and a few others. They are all working away to try and restore Angkor Wat and I think that is amazing!